Warm spring rains in the wee hours had washed Washington’s granite and glass vividly bright this perfect day. People walked with a spring in their steps, blooming cherry blossoms dotted the pink and white landscape, and faces glowed with congenial smiles.

The utopian moment mirrored Hern’s optimism over state primaries trending in his favor and his campaign gaining momentum for the party’s presidential nomination. Most pundits, even liberals in media newsrooms, had nothing but accolades for Senator Herndon Hamilton’s campaign for the GOP nomination.

Anyone else might have allowed himself to gloat, especially at two thousand feet in the seclusion of a Vietnam-era Huey helicopter. But that war and some of the things he did in it taught Herndon Hamilton never to take anything for granted; not even for a moment.

The Huey was the brainchild of Hern’s campaign manager, who reasoned that this vintage chopper emphasized the rival candidate’s dereliction of duty for skirting military service on a head of household hardship exemption in the absence of a father. Never mind the rival’s mother was a wealthy businesswoman and the rival had never worked a day in his life.

Reverse psychology the staff had called it. Using the Huey scored a double whammy. Never pass up an opportunity to put a plus in your column and a minus in theirs—like a two-stroke swing coming down the stretch where Tiger Woods makes birdie and Sergio lips out for bogey. The Huey and the Tiger Woods analogy both came from his black campaign manager.

Hern was all for black pride, but that’s not what got him elected to the senate and in line for the GOP presidential bid. Race had neither hindered nor helped Herndon Hamilton in any perceptible way, at least not that he was aware of. He’d always operated on the premise that being black was a non-issue. He had no control over the color of his skin. He never expected to be treated unfairly because he was black.

Hern’s dad, who had enjoyed 27 years as a tenured professor of philosophy at the University of Michigan until colon cancer abruptly claimed him, always said you get what you expect from people. If you expect them to look down on you they probably will. People sense it like a subliminal invitation to fulfill your self-prophecy.

Pop, as Hern called him, stayed clear of the politically charged racial divides of sixties and seventies academia, arguing that affirmative action and quota hiring were like admitting inferiority because it lowered the standards. It was like lowering the basket and making white folks equally represented in the NBA. It wouldn’t do much for the game—just have everybody getting in each other’s way, and out of that would come animosity. If you’re going to claim the respect and dignity of being black, pop used to say, then you can’t  be going out and saying mandate my success because being black is a disadvantage. You couldn’t have it both ways. Not with pop.

Hern missed him, and moms did, too. Good thing sis was there to take care of moms. He would have to schedule a visit. It had been more than five months since he’d been up to see moms in Detroit where she’d moved in with sis.

The whirr and whine of the Huey’s Lycoming power plant and transmission took Hern back to Bien Hoa, Vietnam. The first time he’d witnessed a Viet Cong sympathizer pushed screaming in terror from a cargo door at a thousand feet above a clandestine jail, where other VC prisoners watched in horror, shocked his Midwestern sensibilities. Hern never did adapt to calling them gooks. Just as his skin color was never an issue, the physical features of Asian counterparts and adversaries were never an issue. In fact, he’d found Vietnamese women quite attractive and that’s what led to the affair with Phuong, his assistant at Bien Hoa.

Rattles inside the cargo bay and a protracted bank around Washington Monument to Teddy Roosevelt Island and straight down the Potomac brought Hern back to the here and now. Holding on for the approach became the priority above picturesque sprawl on the chamber of commerce kind of day.

The Huey banked in a broad circling descent causing afternoon sunlight to pan through a cargo door window and across olive drab interior like a prison searchlight in an old movie he could not remember.

Originally, the rally had been planned adjacent to the Lincoln Memorial Reflecting Pool but D.C. concerns about access and emergency egress reassigned the event 200 yards south to the recreational field across Independence Avenue.

“Looks like a good turnout,” Hern hollered to a lieutenant whose sole responsibility it seemed was to open and close the cargo door. It was easy when no one was pumping AK-47 lead at you.

“Deservedly so, sir,” the lieutenant yelled over chopper noise.

Hern folded a page of notes into his coat pocket.

The Huey nosed up, scrubbed off speed, and settled in a perfect descent onto a roped clearing near a covered platform swathed in red, white, and blue banners, with crepe bunting wafting in gentle afternoon breeze.

The Lycoming whined slower like one of his daughter Julie’s video games after a disappointing miscalculation. Hern waved off the lieutenant and opened the cargo door himself. He paused while rotor wash diminished and the familiar smell of oily engine heat greeted his nostrils.

Cheerful onlookers chanted enthusiastically behind a pushing mob of press people circled round the roped perimeter with their facial expressions contorted and strained behind lenses trained on Senator Hamilton.

Hern tapped the pilot on the shoulder. 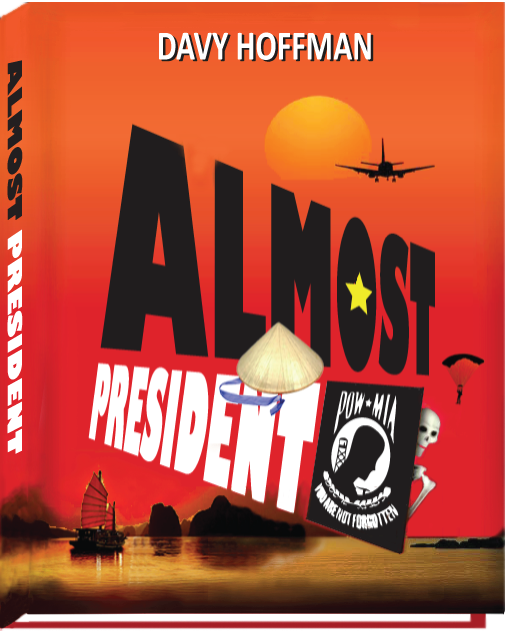 “Good job, skip. You put her down like a butterfly with sore feet.”

Hern sprung forward, straightening his coat and tie as he strode purposefully toward an opening in the rope manned by a team of security agents.

He switched on his game face and friendly wave for the bevy of broadcast and print people parting before him blurting questions, poking microphones, squinting into viewfinders and grimacing in the scrum.

Hern regularly studied and practiced his media presence with test tapings and by reviewing coverage such as was happening today. Later, he would have his performance critiqued by his media advisor, Cassie Hirsch—on loan from the prestigious Farnsworth Public Relations Agency.

In the old days there wasn’t so much concern over image. Substance ruled when Hern returned from two tours in Vietnam and was orchestrated into public service by a floundering corps of conservative businessmen led by a retired advisor to the Agency who was on the board of directors at a university in Michigan.

The crowd broke into a chaotic roar at the sight of camera lights signifying the imminent appearance of Herndon Hamilton, even though he was no more visible than he would have been in a basketball huddle. Hern had loved basketball and was a fine shot, when nobody was guarding him. It was his inability to cross over on the dribble to his left hand that had made him an easy mark for any experienced defender, who simply cut him off from going right. But, if you asked Hern, he would tell you that it was because guys five-seven just didn’t make the team. What he excelled at, even though it was with no particular fondness for the game, was football. Those same hands that fumbled cross over dribbles with a basketball were like the hundred hands of Hecatoncheires, a yearbook editor had written. But, his teammates had called him squid for how he protected the football.

Backpedaling camera jockeys lurched aside at five wooden steps up to the patriotic stage and Hern skipped up on legs conditioned resilient by regularly running laps in the nearest YMCA swimming pool. Of course he could afford the athletic club and sometimes went there, but the conservative stance of the YMCA organization and their subtle but diligent support in the metropolitan business communities of America made getting wet, which he would do anyway, a tacit endorsement for him. Seventeen million members in the United States and the absentee voters among the thirteen million international members worldwide were nothing to sneeze at.

Across the stage, familiar smiles greeted him. Wife Shevonne, forty-three, gaze fixed and chin elevated stood erect, her dark features emphasized by a red Anne Klein business ensemble and matching pillbox hat. Daughter Julie stood clapping with pride in an unstructured lemon Hilfiger blazer over a black silk blouse, Hilfiger khakis, and a pair of black Mezclan ballet flats with revealing toe cleavage. Julie’s hair swept back giving prominence to her high cheekbones and wide-set eyes, while her full smile now that the braces were off suggested what Tyra Banks might have looked like at fifteen.

Strategist Paul Mason cued a drum roll from the musicians in front of the stage and purposefully leaned his late forties frame toward the podium microphone pre-set for Hern. He brushed back thinning blond hair and with the flair of a broadcast personality announced confidently, “Ladies and gentleman, please welcome our next president of the United States of America, Herndon Hamilton!”

The crowd erupted in support of their candidate as musicians crashed symbols and belted out a brassy rendition of “Happy Days Are Here Again.”

Hern made his way toward the podium, pausing to point and wave, acknowledging key individuals in the audience. At the microphone Hern smiled and waved.

“Thank you,” he chuckled at their enthusiasm. “Thank you very much.”

Supporters elevated their cheering and the musicians played on, so Hern raised both arms victoriously and shook both fists. He turned and took Julie by the hand, then remembered Shevonne, and walked them with arms raised to stage front above musicians watching with upward glances for their official cue to wrap it up with a fine sforzando.